The term "Extended Reality" is used to describe all variations of computer generated environments where humans interact with the technology, the most widely-known being VR (Virtual Reality) and AR (Augmented Reality). XRi at Kent State has focused their attention and research efforts on studying the effectiveness of extended reality environments for use in professional development. More information on the Initiative can be found at xr.kent.edu.

The XRi team was awarded funding from the National Science Foundation to design and study immersive 360° video experiences incorporating single and multi-perspective video to facilitate teacher education of future elementary mathematics teachers. They disseminate information through publications, which can benefit from visual aids to help explain complex technology or ideas.

Through their research and interaction with ideal users, they have found that many in the education field are currently not familiar with extended reality technology or practices. This lead to the development of the following static graphics and animated GIFs to help visually express the concepts in a simple and concise manner.

In today's world, most are familiar with traditional videos. These videos are viewed on phones, computers, tablets, televisions, etc. and are mostly rectangular in format. They are typically viewed from a single perspective, determined by the camera used to capture the video or a combination of camera angles presented in a specific order through editing.

With 360° video, the "screen" is a spherical space generated outward from the center point of a 360° camera. The video is recorded from all angles and plays back on the inside "walls" of the spherical screen. When viewed by a user through a VR headset, they are in control of what area of the sphere they are watching as the video plays around them. 360° video can also be viewed on the same devices as traditional video, and viewer perspective is adjusted either by moving the device around or using touch or a mouse to manually move the view angle around within the environment.

Trying to effectively convey these differences through static graphics alone proved to be a challenge. On a hunch and inspiration from my project manager's love of GIFs, I experimented with incorporating small animated movements to better show the differences in a 2D format. The final animations were well received and will be incorporated into a future digital publication from XRi.

In this context, multi-perspective video refers to 360° video recorded simultaneously using more than one camera from various points of view. For this example, the first static map below shows the placement of 6 different cameras within a classroom, labeled A through F. The second map depicts a perceived "range" for the sphere of each camera, not shown at actual scale.

The challenge was to visually depict an event within a classroom happening in real time, and to demonstrate how multi-perspective can be a unique approach to educating future teachers. Because a person can't physically be in two places at once, XRi is currently developing a program that can link 360° videos to create multi-perspective experiences. By being able to view a notable event happening in real time from multiple perspectives, the research team is exploring the benefits this could have to help teacher education students identify and study a classroom event before, during, and after. This novel approach could help future teachers discover how to replicate or prevent such events in the future. This study has been made more crucial by the impact of COVID-19 on classroom environments and the access teacher education students had to these hands-on/in-person classroom experiences.

To cut down on potential information overload, I narrowed the focus of the graphic down to an event occurring at a point that intersects the scope of both cameras E and C. In the time leading up to the event, the movements show how a teacher may be looking around within the classroom environment from either camera's point of view. When the event occurs, it is viewable from both perspectives in real time. These movements are meant to show how the same event can be seen taking place from more than one vantage point within the classroom, essentially allowing a teacher to be in two places at once or have "eyes" on the back of their head.

To drive home the point of multi-perspective and simultaneous actions, I incorporated a timeline at the bottom of the graphic that follows the progress of the juxtaposed videos. The marker indicates the passage of time and shows the event occurring at the same time stamp of both videos. The final animation was commended for its ability to visually express a complex concept in a clear way. The static and animated classroom maps will be incorporated into a future digital publication from XRi. 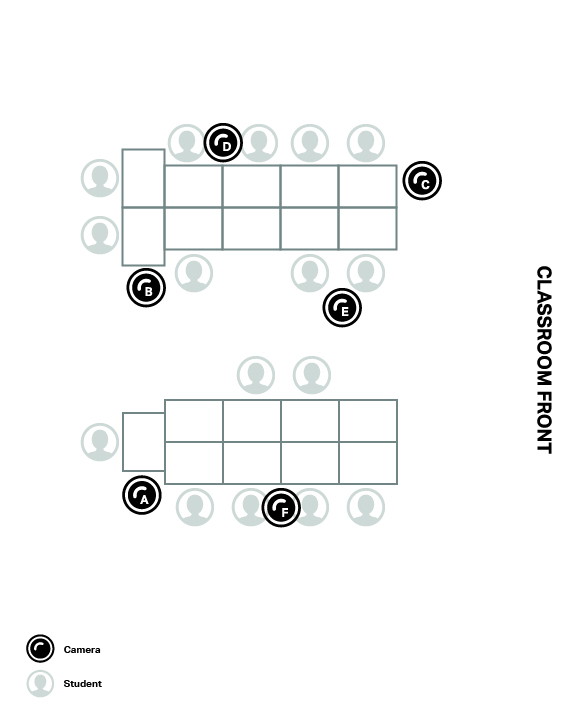 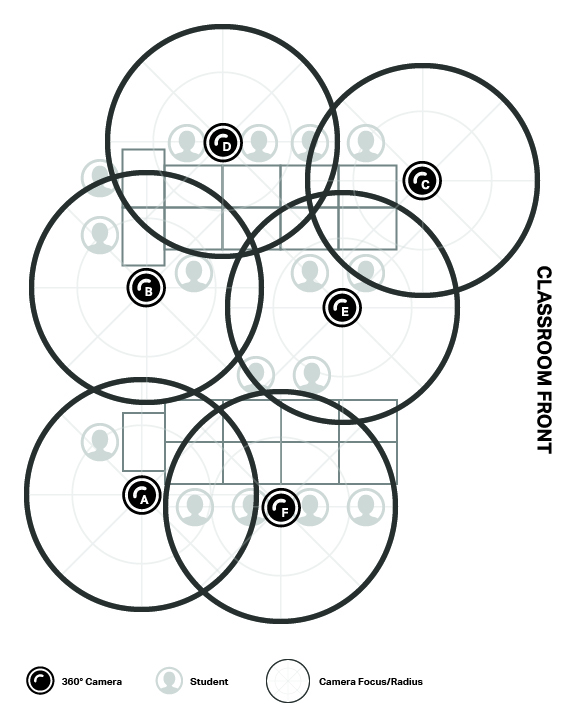 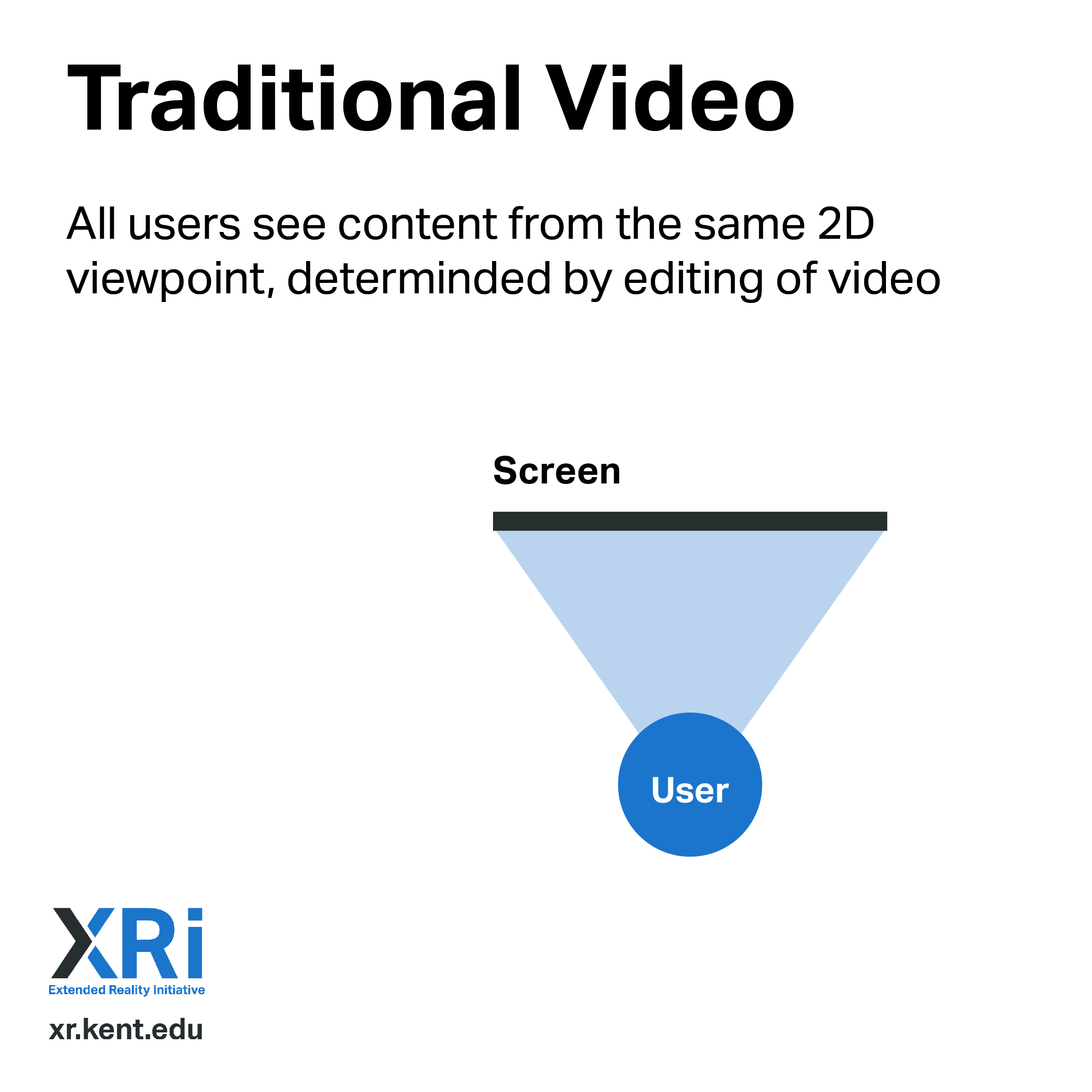 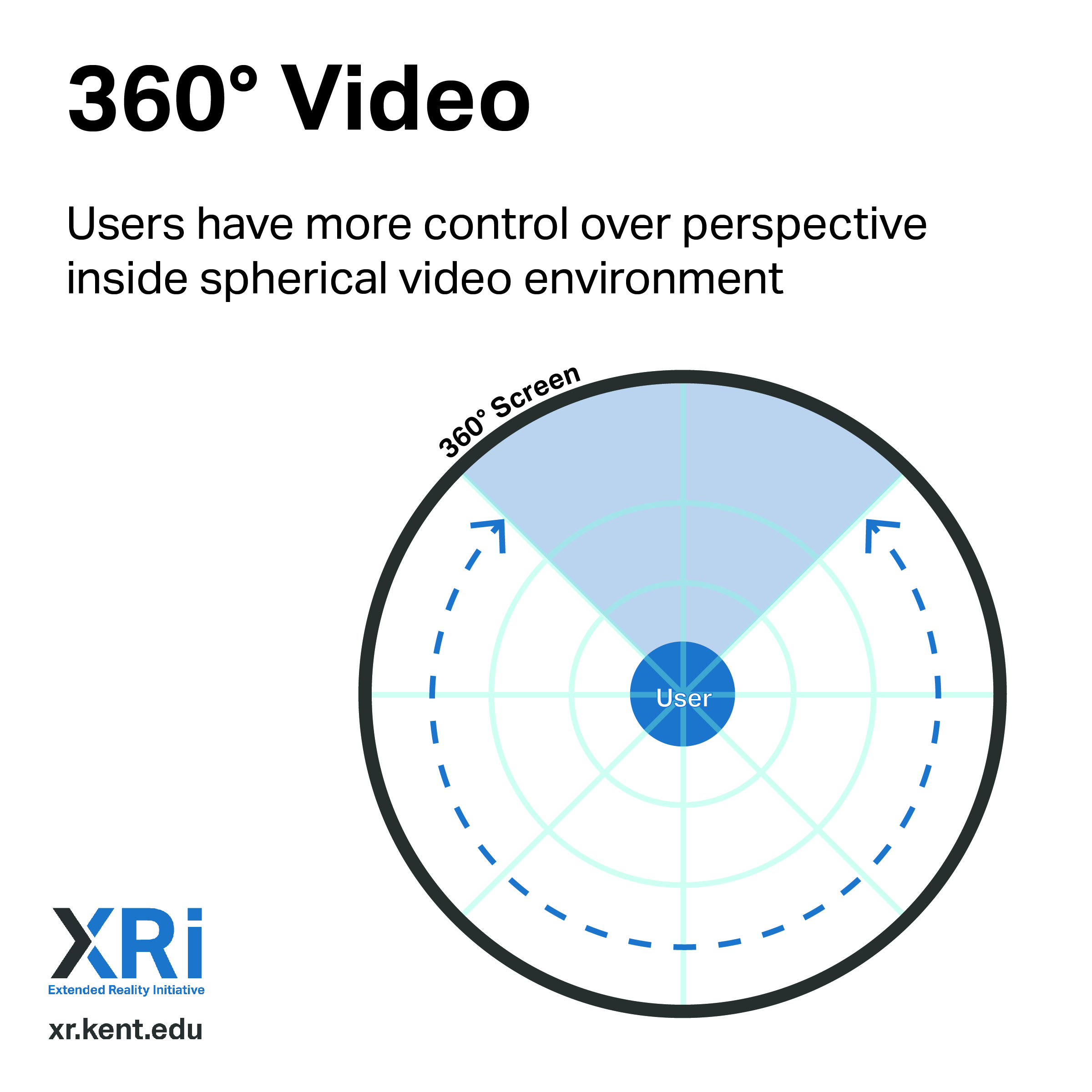